50/50 GUARD DVD by KRISTIAN WOODMANSEE 15.00$
Back to products
Next product 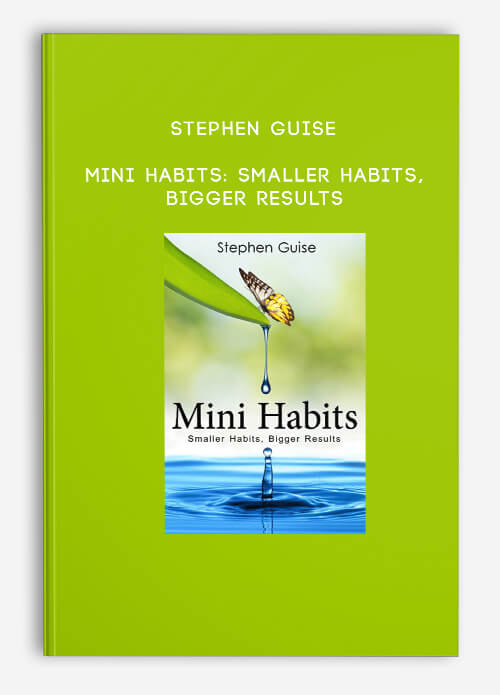 Description See our Privacy Policy and our Terms of Use for more information] Lasting change for Early Quitters, Burnouts, The Unmotivated and everyone else too When I decided to start exercising consistently 10 years ago, here’s what really happened: I tried to “get motivated. It worked sometimes.” I tried to set big bold goals. I almost always failed them. I tried to make the changes last. Like most people who try to change and fail, I assumed I was the problem. Then one afternoon, after another failed attempt to motivate myself to exercise, I (accidentally) started my first mini-habit. I was initially committed to doing a push-up, and it turned into a complete workout. I was surprised. This “stupid idea” was not going to work. I was surprised again when my success with this strategy continued for months (and to this day). I had to consider that maybe it was not the problem in those 10 years of mediocre results. Perhaps it was my previous strategies that were ineffective, despite being repeated often as “the way to change” in countless books and blogs. My suspicions were correct. Is There A Scientific Explanation For This? In seeking understanding, I found a large number of scientific studies that had answers, without anyone interpreting them correctly. Based on the science, which you’ll find peppered throughout Mini Habits, we’ve been doing it all wrong. You can be successful without the blame, intimidation, and repeated failure associated with strategies such as “getting motivated,” New Years Resolutions, or even “just doing it.” In fact, you should stop using those strategies if they are not giving you great results. Most of the popular strategies don’t work well because they require you to fight your subconscious brain (a fight not easily won). Only when you start playing by your brain’s rules and take your human limitations seriously, as mini habits show you how, can you achieve lasting change. What is a mini habit? A mini habit is a very small positive behavior that you force yourself to do every day; its “too small to fail” nature makes it weightless, deceptively powerful, and a superior habit-building strategy. You will have no choice but to believe in yourself when you are always moving forward. The barrier to the first step is so low that even depressed or “stuck” people can find success early and begin to reverse their lives immediately. And if you think a push-up a day is too small to matter, I have a story for you! Goal for the first step They say that when you aim for the moon, you will land among the stars. Well that doesn’t make sense, since the moon is closer than the stars. I digress. The message is that you must aim very high and even if you fall short, you will still get somewhere. I have found the opposite to be true when it comes to productivity and healthy behaviors. When you point to the moon, you will do nothing because it is too far away. But when you aim for the step in front of you, you can go ahead and get to the moon.

I have used the Mini Habits strategy to get into the best shape of my life, read 10 times as many books and write 4 times as many words. It started requiring a push-up of myself every day. How ridiculous is that? It’s not that ridiculous when you consider brain science, habits, and willpower. The Mini Habits system works because it is how our brains are designed to change. Note: This book is not for breaking bad habits (some principles may help you break habits). Mini Habits is a strategy to create permanent healthy habits in: exercising, writing, reading, thinking positively, meditating, drinking water, eating healthy food, etc … Self Help – Online Self Help Course More information about Self Help: Self-help or self-improvement is self-guided improvement, financially, intellectually, or emotionally, often with a substantial psychological basis. There are many different group self-help programs, each with its own approach, techniques, associated beliefs, advocates, and in some cases leaders. Concepts and terms that originate from the self-help culture and the Twelve Step culture, such as recovery, dysfunctional families, and codependency, have become firmly embedded in mainstream language. Self-help often uses publicly available information or support groups, both online and in person, where people in similar situations come together. From early examples in self-driven legal practice and home counseling, the connotations of the word have spread and are often applied particularly to education, business, psychology and psychotherapy, commonly distributed through the popular genre of self-help books. According to the APA Dictionary of Psychology, potential benefits of self-help groups that professionals may not be able to provide include friendship, emotional support, experiential knowledge, identity, meaningful roles, and a sense of belonging. Tony Robbins – Get The Edge You will have the course by the safetest way.